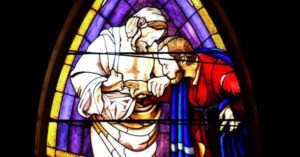 Each year on this Sunday after Easter Day we encounter Thomas.  Thomas has been held up as the ‘doubting’ saint, who was somehow a second-class disciple because he had not believed Jesus had risen from the dead without his own first-hand proof.

For some reason, Thomas had not been with the other disciples when Jesus appeared to them after the resurrection.  He had not been in that upper room with Peter who had denied Jesus, or the other disciples who had fled for their lives when Jesus was crucified.  When they told him the story, the amazing story that Jesus was risen, his questioning mind needed proof, and sadly poor Thomas has been condemned as the faithless, doubting disciple ever since.

Thomas is the saint for all of us who have times of questioning, times of doubting and times of wondering about our faith.   Anglican faith is not a package deal.  Following the tradition of Richard Hooker, it is built on three key things: scripture, tradition and reason.  Anglicanism has reason and permission to think and to question at its very heart, and the most important thing to remember today, is that this is not lack of faith.  Doubting and questioning are part of faith.

When Jesus returns again, he comes specifically to Thomas to answer his doubts.  The scene is tender.  There are no recriminations and no accusations, just a gentle answer to his questions and his doubts, point by point, until Thomas falls to his knees, and in a great affirmation of faith says ‘My Lord and my God.’