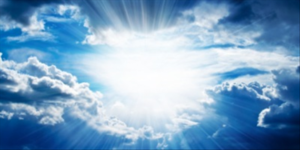 Last Thursday we marked Ascension Day, the day when the resurrected Jesus physically left this earth to return to God.   The disciples had just been getting used to the fact that Jesus wasn’t dead – he was alive, when once again he was taken from them, and they had to deal with his absence.  How the Ascension happened is a mystery, and we have images of clouds and disappearing feet. What we do know is that Jesus was taken from the human place, from earth, to the divine place, where he is confirmed as God’s Son.

This Sunday morning, we are in between Ascension and Pentecost.  Jesus has gone and we have to come to terms with his seeming absence, and yet Pentecost, when his presence will be with us and among us in a new way is just around the corner.

We saw his light break through the cloud of glory
Whilst we were rooted still in time and place
As earth became a part of Heaven’s story
And heaven opened to his human face.
We saw him go and yet we were not parted
He took us with him to the heart of things
The heart that broke for all the broken-hearted
Is whole and Heaven-centred now, and sings,
Sings in the strength that rises out of weakness,
Sings through the clouds that veil him from our sight,
Whilst we ourselves become his clouds of witness
And sing the waning darkness into light,
His light in us, and ours in him concealed,
Which all creation waits to see revealed .