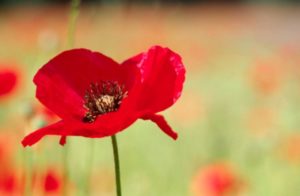 This Sunday, November 11th, marks one hundred years since the end of World War 1, which was classified at the time as the war to end all wars.  Of course, this was never the case, and the horror and devastation of war continues to end lives and displace people from their homes, who then flee across the world as refugees.  Peace is never made by waging war, a lesson political powers, governments and leaders have never learnt.

Marking Remembrance Day has been a tradition since 1919, when it was inaugurated by King George V to honour the many members of the British armed forces who lost their lives during that dreadful war.  Many of us will have family stories about ancestors who either survived this war, or were permanently damaged, or who lost their lives, cut off so often as young men in their prime.  In my own family one of my mother’s aunts lost her fiancé, and then never married as there were so few young men left.  A great uncle was so damaged by the war with a condition known as ‘shell-shock’ that he never recovered, had constant nightmares and was never able to work again. Many families have stories such as these.

Today we will honour this important and historical day with the opportunity to light a candle of remembrance during worship, and by observing one minute’s silence at 11am during morning tea.

As we think about this war, or any war, there are many women who are left to cope as widows, often with children to care for.  Today our readings present us with stories of two widows.   Both of them demonstrated reckless faith and impossible trust. During a devastating famine, the widow of Zarephath shared her last portion of food with the prophet Elijah, while trusting both her child’s and her own life to God.   Her faith that God would continue to sustain her and her son through the famine was confirmed, as the little jug of oil and the pot of flour continued to be filled.  Her faith had to be lived out daily, each time she picked up the jug or the pot, faith that assured her that God would not abandon them.

The other widow, who we meet in Mark’s Gospel, was poor and elderly. Jesus comments on her faith as he observes her giving back to God from her very meagre resources in an action he shows to be greater than all the large amounts being ostentatiously deposited in the treasury.  These women, vulnerable widows, show us the way to faith.  We can learn much from their example.