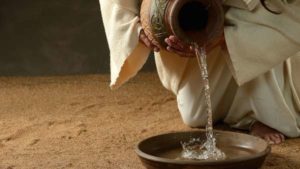 Today’s Gospel is once again, very familiar.  We encounter it regularly as it’s reported in all the Gospels.   It’s a story that’s fundamentally about our human need to be important. The last time he gathered with the disciples in the upper room before he was led out to his death, Jesus demonstrated what he understood greatness to be.  He took a bowl and a towel and he washed his disciples’ feet.  In this simple action he addresses all their disputes about power and greatness. Greatness is about serving.

Although we don’t like to imagine ourselves as powerful people or people who misuse power, it is something that lies just beneath the surface of human nature.  We like to be noticed, we like to be seen to achieve, and if we’re passed over for promotion, we become at the very least, annoyed.  It is the thing that lies beneath most of our human disputes and falling out.   We’re told from childhood – don’t be a doormat, stand up for yourself.  Perhaps you played the childhood game ‘I’m the king of the castle – get down you dirty rascal!’, where the last one on the top of the pile is the king and the one who has control.

And yet Jesus, once again points to a different way of being.  He not only talks about, but physically lives out a vulnerability that never seeks to push itself forward.  And he warns the disciples in today’s reading, as they vie for place and position, that they don’t understand that following him, the path of discipleship, will take them directly to the cross.

Over the past 30 years or so, the church sought to protect itself, the institution and its assets from any claims by sexual abuse survivors.  It did this by denying their claims and by moving along any accused priest, sometimes even promoting them, and offering them a bigger platform for their crimes, simply to ensure that the Church institution retained its power, status and its place in the world.  How far this way of being is from the path Jesus taught.  The church should always stand for vulnerability and weakness rather than power and oppression, because that cross-journey is the Christ-like path.

Jesus didn’t mind the disciples’ ambition, He just wanted to change the nature of the struggle. He didn’t want them knocking each other off. He wanted them lifting each other up. He wanted to replace power, influence, wealth and celebrity with submission, cooperation, generosity and transparency.  He did this by injecting one word into the ‘formula for success’:  servant.  In Jesus’ kingdom, leadership and greatness aren’t measured by how many people serve us, but by how many we serve.